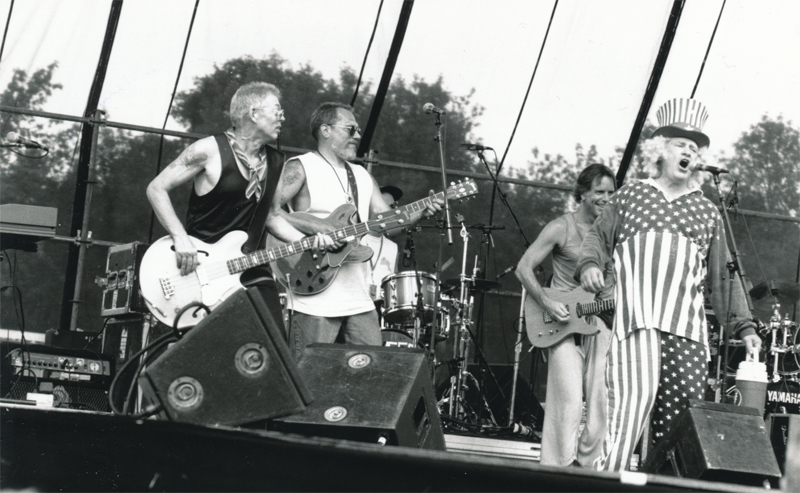 Reviewer: doug_the_dude - favoritefavoritefavoritefavorite - July 27, 2021
Subject: --
Nice to hear this one again, although at the time I was so :::on the bus::: I can't remember a single note played from any of the bands that day. Don't normally regale "experience" stories, but here goes: I *do* remember wandering around the campsite and having one of those R. Crumb "I gotta lay off this stuff" moments when a tubby guy with a pointed beard and round glasses appeared in my frame of vision, promising free doses for the masses. Part of me stubbornly still believes he was satan incarnate, but hey....we all have our moments!

ANYWAYS Ratdog's set here, hampered by some tech probs, builds to be a lot better than how it starts, although that Eternity is *waaaaaay* out there - Rob proves he is for sure the band's secret weapon, and they let him out of the cage a few times....I dunno, I have to agree with mid-maine re: the vibe...Ratdog is just too dark, smoky, jazz-hall-blues for a bright, sunshiney festival crowd, and if you have ever been to the Oregon Country Fair, you know what I mean. This is Kesey's home turf, a year after Jerry's passing, and while all that voodoo we can usually manage to put in its place, out comes Bobby with Victim or the Crime, an embattled song he had PR-trouble enough playing while Jer was still alive....In 1996 it was now impossible to hear that song and not think of the big man, but Bobby bravely throws it out there and sees if it sticks - again, though, Country Fair? It just doesn't *feel* right.

But I'll take a little unsettling energy over what most of the set offers - a well-done but ultimately lightweight group of RD-typical drinky-smoky-bluesy numbers. Jorma doesn't add much, really, until that ending - **then** we have a festival show - love, love hearing Ratdog play White Rabbit (anyone know who was on vocals? I can't remember) and Kesey's minions come out to hijack the rest of the show, more or less - a much-needed shot in the arm, if you ask me...

But I dunno...you can't really *blame* Ratdog - they came to the festival and did what they do. I think at least *this* incarnation of the band was better off playing in other places - too many creepy-crawly vibes here for such a bright, sparkly event. Then again, maybe they were needed....

I tell you what, though, if you want pure *awesome* rock from this same festival, check out the set from Los Lobos, with Bertha dedicated to Jerry. Now THAT'S how you balance out the vibes!

Trying to take nothing away from the performers, but the real show was in the campground the night before. Bonfires and drummers circles, calliopies and clowns, knights in armor and maidens to be rescued, too much of everything was just enough! And there was that asshole wandering around naked at 6 am yelling over and over "Im blaming it all on the tweakers". I was rethinking my opposition to the death penalty!

Needless to say, many of us were not in top form for the show, so it's great to hear a quality recording of it. Thanks to the taper!

Usually I try to seperate the live experience from the quality of the performance, but I'm giving this one five stars regardless, it was that special!

Emotions were mixed one year after Jerry's passing. All the NW freaks were there, in force, as well as some braver souls who had actually followed the Furthur festivals. The dividing line between the lot and the venue, in my hazy memory, seemed like little more than hay bails and some sort of waist-high fence. This was a completely pastoral, Country Fair-style bacchanal, complete with overnight camping.

Before Ratdog's set, Kesey, Babbs, Romney, and many other Pranksters (two or three generations worth), rode atop the facsimile bus–the one of Smithsonian fame–waving banners, tooting horns, shouting, etc. Kesey had one of those old fire extinguishers which one pumps, and he was spraying the audience. People either ran to the spray or cringed away in fear, not knowing which sort of prank it might be. (Indeed, one friend of mine had been pranked earlier in the day to the point where he had a hard time recognizing me. I think his involved a squirt gun.)

Ratdog's music was bittersweet as Bobby consciously left a hole in the tunes where our departed friend would be. Jorma filled in some, but there was a palpable absence in the air; and yet, we soldier on. . . . The others on stage were the rag-tag Prankster collection who had ridden in on the bus, and the only ones who come to mind are Babbs and Romney. Kesey's and Babbs's sons must have been among them, too, but it was hard to tell.